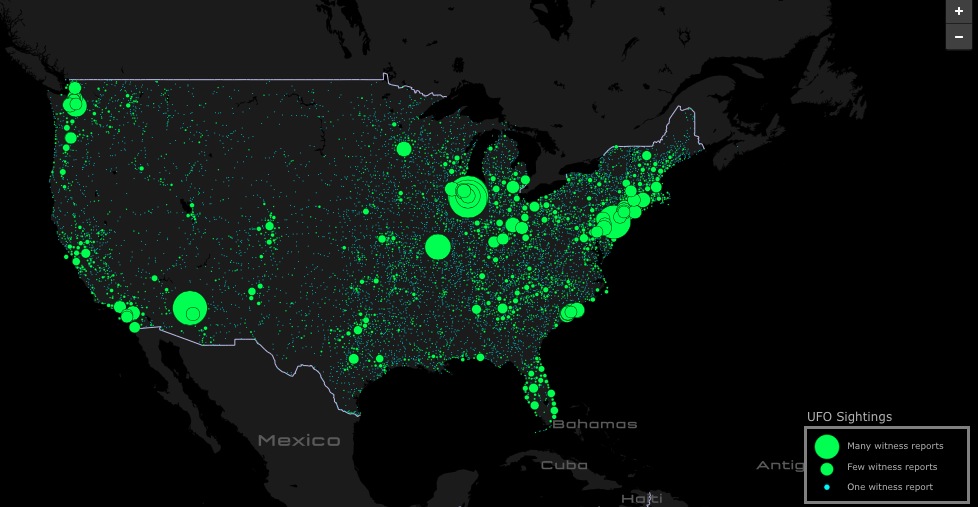 Dating back to 1905, there have been more than 90,000 UFO sightings reported to the National UFO Reporting Center.

Pull all those together into one map with each circle corresponding to a UFO sighting and the size representing the number of reports in an area and you have the work Max Galka recently published on Metrocosm, a blog that furthers the “exploration of urban life through the lens of statistics, data, and quantitative visualization.”

Check out to Galka’s interactive map page for a larger image and to get more details on the sighting reports.

Galka wrote that he assumed more sightings in one area could lend more credibility to the UFO reports.

“These are the 10 most credible UFO sightings in recent history in the U.S.,” according to Galka’s data analysis:

Galka then set about trying to figure out why certain areas seem to have higher sighting numbers than others and if a certain time of year seems to be a factor as well.

According to his post, Galka initially thought the number of sightings in Illinois could be related to the proximity of O’Hare International Airport. But he mapped other major airports in the country and didn’t find a similar concentration of sightings at those locations.

However, Galka did find that “UFOs seem to have a penchant for firework displays” with more sightings before reported on the Fourth of July, New Year’s Eve and New Year’s Day, compared to other days of the year.

“Some of the bigger UFO sightings also coincide with large meteor showers or space craft launches. Though when I looked into it, the effect did not come out very strong,” Galka wrote.

0 0 0 0
Previous : UFO Sighting in Arlington, Washington on June 4th 2015 – Very bright moving very slow then faded into not seeing
Next : Could UFO sighting be sign Large Hadron Collider has created portal to other … – Express.co.uk