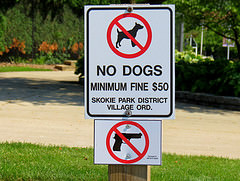 Is it a bird, a plane or an Illinois resident’s over-active imagination? According to a map of reported UFO sightings around the country, Illinois is a hotbed of extra-terrestrial speculation, with six of the 10 most widely-spotted UFO events.

The National UFO Reporting Center has collected more than 90,000 reports in the U.S., from 1905 to the present, according to CityLab. Max Galka, a New York-based data visualist and mapmaker mapped the reports online earlier this month. Galka says he doesn’t know what makes Illinois such a locus of paranormal paranoia.

“My initial thought was that it must have something to do with O’Hare Airport, the busiest airport in the U.S. through most of this period,” he wrote in an analysis online. But, “Aside from Chicago, it does not appear there is much correlation between mass UFO sightings and big airports.”

Several of the most-reported UFO sightings came from the suburbs—demonstrating what we already suspected about what living in the ‘burbs does to the mind.

“I looked back at the 2 remaining objects only to see the top object slowly fade into the night sky as if it had risen straight up,” one Tinley Park UFO-sighter wrote in to the NUFORC. “The first moving object remained in position at least until I entered my truck to start my route. very freeky!!!!!!!!!” (sic.)

Another UFO sighting in Rockford, Illinois in January 2001 received 25 reports and two “Blue-Green Fireballs,” were reported around the Midwest in 1997 and 1999 by over 40 people each.

CityLab compiled some of the stranger Illinois-based UFO sightings, including a report of clouds that looked like “bubbles, erupting downward like spheres,” and a black triangle behind them in Melrose Park in 2004; “three brownish objects gliding through the sky, forming a perfect triangle,” over Petersburg in 2009; and a “saucer-disk shaped” object over Grayslake in 2007.

That so-called flying saucer shook one Grayslake resident’s faith in the logical world.

“It’s been a few weeks now and I decided that I have to tell someone who could possibly make sense or use of this, I am trying to reconcile the fact that I really don’t believe in UFO’s with seeing this thing, this just won’t go away, silver saucers don’t just float in the sky and its starting to mess with my mind,” the report reads. “I am a very rational logical person not given to superstition or the like so I pass this information on to try to lay it to rest.” (sic.)

We believe you, buddy.

With the growing popularity of drones and disparity in laws regulating their use around the country, UFO sightings are on the rise. But they could ultimately give people an easy explanation for strange lights and shapes in the air.

It all makes us wonder, should the little green men really come, if The First Midwest Bank Amphitheatre will be the first glimpse of Earth civilization they judge us on—and whether that’s a good or bad thing.

0 0 0 0
Previous : UFO Sighting in Hobart, Tasmania on August 24th 2014 – Driving home saw five lights hovering quick over the hill but they became distant so quick I called the police they had a look just brushed me off
Next : Illinois Is The UFO-Sighting Capital Of America – Chicagoist